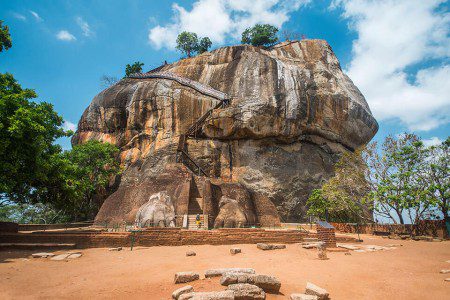 A visit to this place will show you an 1600 years old Sigiriya Fortress which was built by King Kasyapa. This massive compound is protected by two moats and three ramparts. It is once known to be the private residence of King Kasyapa and also one of the best places to visit in Sri Lanka.If you are interested in ancient places, this is one of the best tourist places to visit in Sri Lanka.

WIki : It is likely that the area around Sigiriya may have been inhabited since prehistoric times. There is clear evidence that the many rock shelters and caves in the vicinity were occupied by Buddhist monks and ascetics from as early as the 3rd century BC. The earliest evidence of human habitation at Sigiriya is the Aligala rock shelter to the east of Sigiriya rock, indicating that the area was occupied nearly five thousand years ago during the Mesolithic Period.

The Yala National Park lies in the south-eastern part of Sri Lanka closely hugging the Indian Ocean. It is amongst the famous Sri Lanka tourist places that attracts a lot of tourists every year.

Highlights: A safari to this natural park will surely leave you jaw drop as you will be able to witness Sri Lankan Sloth Bear, Leopards, and Elephants in big numbers.

Wiki : Yala (යාල) National Park is the most visited and second largest national park in Sri Lanka, bordering the Indian Ocean. The park consists of five blocks, two of which are now open to the public, and also adjoining parks. The blocks have individual names such as, Ruhuna National Park (Block 1), and Kumana National Park or ‘Yala East’ for the adjoining area. It is situated in the southeast region of the country, and lies in Southern Province and Uva Province. The park covers 979 square kilometres (378 sq mi) and is located about 300 kilometres (190 mi) from Colombo. Yala was designated as a wildlife sanctuary in 1900, and, along with Wilpattu was one of the first two national parks in Sri Lanka, having been designated in 1938. The park is best known for its variety of wild animals. It is important for the conservation of Sri Lankan elephants, Sri Lankan leopards and aquatic birds.

Horton National Park is a ‘food for the soul’ kind of mesmerizing locale. The park is perched in the shadows of the country’s 2nd and 3rd highest mountains, Kirigalpota and Totapola. The place is also termed as world’s end due to its undaunting mysterious views of waterfalls, misted lakes and earthy species of flora and fauna. The national park is actually a plateau and is 2000m high. It is better to start early in the morning to witness this heavenly place

The Royal palace of the Kandyan Kingdom is the last reminiscence of the reigning King of Kandayan, Sri Wickrama Rajasinghe. The palace dates back to the 14th century, yet witnessing the glory and glamour of the kingdom is stupendous. The Palace has seen scars from many wars and tremors of foreign invaders like the Portuguese.

Also renowned as Pointe de Galle Light, Galle Lighthouse is a prominent tourist attraction of Galle. Situated on the shores of Galle, the lighthouse makes a postcard-perfect scenario against the emerald waves hitting the fine beige sands of Galle. Also, it is situated inside the architectural marvel of the city, Galle Fort, which defines its scenic beauty further. Along with the lighthouse, one can also enjoy the Galle Fort, Dutch Reformed Church, Galle Dutch Fort and Galle Fort Clock Tower in the same premises itself. All these factors make this place a not-to-miss while visiting the Sri Lankan city of Galle.

Ella is popular for its lush greenery and the cool and collected environment amongst the people. Ella Rock is a popular hiking and camping destination and it is a delight to witness spectacular views with haze and clouds surrounding the area.The average time it takes to climb up and down is 4 hours making it the most loved Sri Lanka tourist place for trekkers.

Highlights:
– Sitting on the hills just 2.5 kilometers above Ella Town.
– Takes you through beautiful and dense forests

Nuwara Eliya is Sri Lanka’s hill station famed for its tea production. With a multitude of gorgeous attractions ranging from waterfalls and tea plantations to gardens and lakes, Nuwara Eliya is the epitome of scenic beauty. Add to that the colonial-style buildings dotting the area, a golf course and the cold climate— and you’ll feel like you have entered a world unlike Sri Lanka’s iconic landscape; no wonder it is also called Little England!

Anuradhapura is a historical paradise as it houses several heritage monasteries, palaces and monuments. It is known for its vast dagobas or brick stupas, ancient ponds and pools and magnificent temples. The city was established as the first capital of Sri Lanka in 377 BC. It was also at this time that Anuradhapura rose to prominence as a seat of political and economic importance.

Dambulla is a small city in central Sri Lanka known for being home to the largest and best-preserved cave temple complex on the island. A sacred Buddhist pilgrimage site for 22-plus centuries, the Dambulla Cave Temple complex consists of 5 caves covered in colourful frescoes and more than 150 Buddha statues.

Signup for your next Reservation !

Register with your email

Please enter your username or email address. You will receive a link to create a new password via email.